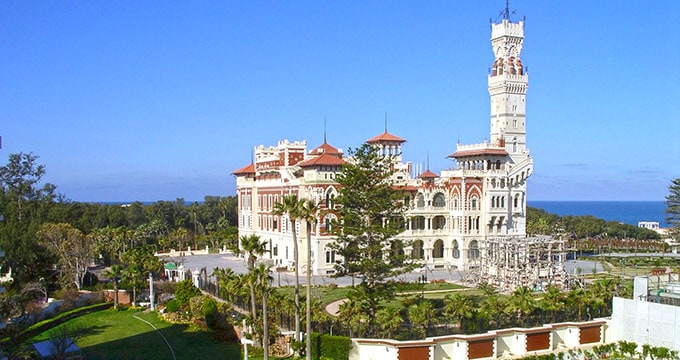 The Montaza Complex was envisioned and later brought to life by Khedive Abbas Helmy II, the final Khedive of Egypt and Sudan. Seeing that tiny, idyllic island enamoured him, he coveted a summer residence—removed from Cairo's stern, unforgiving politics.

Romantically, he would dub it a montaza: a serene, elaborate garden.

Under the close advisership of Mahmoud Shokry Pasha, the head of the Turkish Divan in Egypt, the Kedieve would realize his plans for the Montaza Complex.

This project featured two palaces for himself and wide-spanning, groomed gardens that would later become an identifying factor of the property.

The first palace was a two-storey structure that would come to be known as the Seaside Palace. The lower level contained a series of reception halls, while the upper level was designated for the Khedive's chambers and his guests.

The second palace, which was three storeys high, was called the Mountain Palace. It was here that the Khedive would retire after a long day spent outdoors. The Mountain Palace also contained a harem, as was customary for Muslim royals of the time.

In addition to the two palaces, a series of gardens and terraces were built to further the Khedive's vision of a luxurious, idyllic summer retreat. Fruit trees, flowers, and fountains were all strategically placed to create a pleasing and relaxing atmosphere.

The Montaza Complex quickly became a popular spot for Cairo's elite to escape the heat of the summer months. The Khedive was a frequent visitor and often hosted lavish parties and events at the complex.

Eventually, the Montaza Complex came to be known as one of the most beautiful and luxurious properties in all of Egypt. It remains a popular tourist spot today, and its gardens are still as meticulously groomed as they were when the Khedive first had them built.